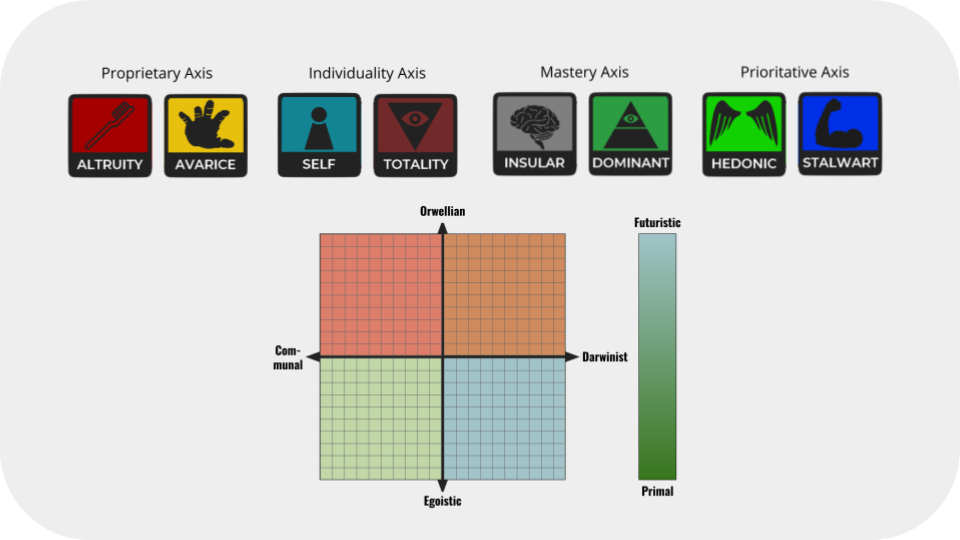 8dreams, based on 8values, is a political quiz that attempts to assign percentages for eight different off-compass political values. You will be presented by a statement, and then you will answer with your opinion on the statement, from Strongly Agree to Strongly Disagree, with each answer slightly affecting your scores. At the end of the quiz, your answers will be compared to the maximum possible for each value, thus giving you a percentage. Note that this should not be taken too unironically.

There are questions in the test.

What Are The 8 Values?

There are four independent axes - Propietary, Mastery, Individuality, and Prioritative - and each has two opposing values assigned to them. They are:

Altruity (Propietary)
Those with higher Altruity scores believe that all property, no matter the form or ownership, should be collectivized. This can include information, all forms of money, etc.

Avarice (Propietary)
Those with higher Avarice scores believe that all forms of property should be privatized and competed in the market. Those who are dominant within the market economy should thus gain more property.

Dominant (Mastery)
Those with a higher Dominant score tend to want their ideology spread throughout the world. They think force can be used when spreading an ideology.

Insular (Mastery)
Those with a higher Insular score tend to avoid forcing an opinion. They would use methods like convincement, propaganda, etc.

Self (Individuality)
Those with higher Self scores believe in the power of the individual. They tend to support an anarchist or egoist government. They believe Egoism is what makes humans humans, and it is impossible to avoid such thing.

Totality (Individuality)
Those with higher Authority scores believe in an absolute government. They think individuals have no power at all, and only the state should have power.

Stalwart (Prioritative)
Those with higher Tradition scores believe that a person is what he is, and his/her characteristics can only by dictated by the strong or by the surrounding environment.

Hedonic (Prioritative)
Those with higher Progress scores believe that a person's personal happiness is the core value of any human. Though not always, they are usually secular or atheist, and support different types of communities standing up for their own characteristics.

What Are The 3 Compass Axes?

What's the "Closest Match" mean at the bottom of the results?

In addition to matching you to the eight values, the quiz also attempts to match you to a political ideology. This is a work in progress and is much less accurate than the values and axes, so don't take it too seriously. If you disagree with your assigned ideology, send us an email at 8dreams.info@gmail.com with your scores, matched ideology, and preferred ideology, and we'll look into adjusting the system. Thanks!

¯\_(ツ)_/¯
If you have any suggestions or constructive criticism, feel free to send it to 8dreams.info@gmail.com or open an issue on the GitHub page here: GitHub Page

The 8values, 9Axes, and SapplyValues project licenses grant the rights to "modify, merge, publish, distribute" the software as long as "The above copyright notice and this permission notice shall be included in all copies or substantial portions of the Software." This project is released under the same license.